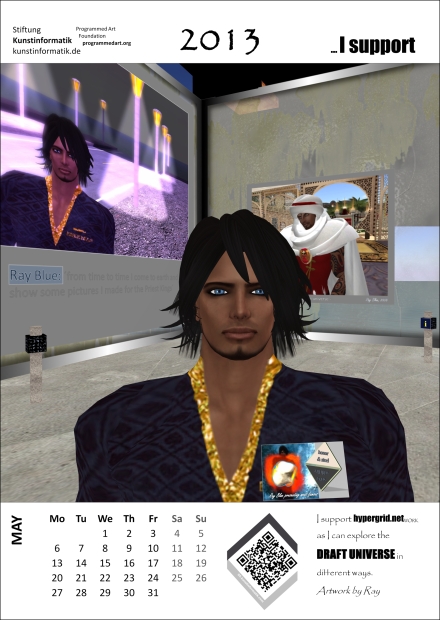 Ray Blue is an artist of a special kind. He might even not exist in RL. He travels to lands far beyond our experience. For some time he was in a 3D habitat of Pandora land of avatars. He is influenced by film makers like David Lynch, Peter Greenaway, Ridley Scott, Werner Herzog. The pictures he makes are not just screenshots, they are transformations of experiences in space and time. He is restless. I have chosen him as I know some of the species calling themselves ‘Second Lifers’ are addicts of virtual realms. As a futurologist I write stories about life in computers. Ray Blue and his work could be part of them.

Picture above reflects on the DRAFT UNIVERSE by Sergei Lukyanenko, which he is actually working on to create.

In the Volcano of Art you see a picture that shows ‘The Queen of Nubia’ [some old players know who this person is, for the rest it shall stay a secret].

I asked Ray Blue to write a short story to add for the ‘Volcano of Art’ that touches his work … and he did:

I woke up in a computer. But I did not know this. Now as I am dead I was told: ‘When transferred your memory on being a simulation gets lost. We have to face a severe problem in our servers, so we had to send an assassin and kill you. No worries: It was done  the way the Prim Kings described in the books of Neruval so your honor of existence stays. But one ID was not scripted proper in the realm you have been acting. The unit seems to know to be in a computer and now we need to do a fast extraction as things with this person are already messing up. You have been the best extractor ever. Never your track was noticed as you do it the artistic ways. Sorry that we had to end your happy life.’

So I work now on the extraction on unit ID: a56483de-cb4b-4778-a0dd-9719f92ba00f.  Just to kill by taking the unit out of the simulation would not fit to the codes of  Neruval. I need to work out a profile and a story. To send an assassin is only suited for high castes and this unit is just a slave. They took me out of the simulation where I was a cherished artist just for a slave? I could not believe until I saw her …. ‘

… and I sent her secretly my ID using a script I had made ages before just in case I need to run away http://w-hat.com/name2key?name=ray+blue